This series was inspired by gangsters and criminals from the 30’s. Clyde Barrow was half of the infamous Bonnie and Clyde duo.  The two’s robbery and murder spree ended with a posse’s ambush in Bienville Parish, LA., on May 23, 1934.

One interesting aspect of this drawing I find interesting is the advertisement in the lower right hand corner for the movie “Marihuana” playing at the Rex theater in Spokane. On the poster it’s called the weed with roots in hell and there are several drawings of hypodermic needles in the advertisement. 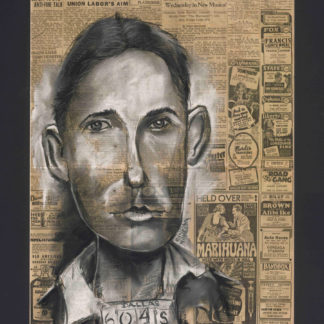