The original charcoal drawings of Gangsters from the 30’s are roughly 19″ x 26″ matted. They are drawn on authentic Spokane Daily Chronicle newspapers from the 1930s.

Born in Georgia in 1904, Pretty Boy Floyd was known for his constant run-ins with police and violent bank robberies. Floyd was arrested for a payroll robbery in the mid-1920s and went on to rob numerous banks after his release. He was often viewed favorably by Oklahoma locals, who called him “the Robin Hood of the Cookson Hills.” After being accused of taking part in the Kansas City Massacre, Floyd was gunned down and killed by FBI agents in 1934. 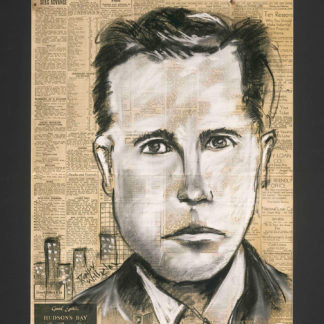