I remember as a kid sitting in the car with my parents down the street from the IGA watching it burn. It burned down and was rebuilt twice during my childhood which fueled many a rumor as to the cause and possible motives of the fires. I remember the day in high school when I heard about the murder of Harold Marley. He was closing up the store when he found a would-be thief hiding in one of the restrooms. The thief shot and killed him in the store’s cafe. Known as IGA for many years, it stood in what is now Columbia Bank. After Harold’s murder, his son-in-law Ralph Bloom took over the day to day operations of the store until it’s closing in 2004. Ralph passed away in 2013.

In my twenties, I worked on and off at the IGA while going to college. By that time however, in tribute, the store was renamed Harold’s. Harold’s was a Sandpoint landmark for many years. I still catch myself needing something from the store when I’m downtown and for just the briefest second thinking, “I’ll just run over to Harold’s and grab it.” 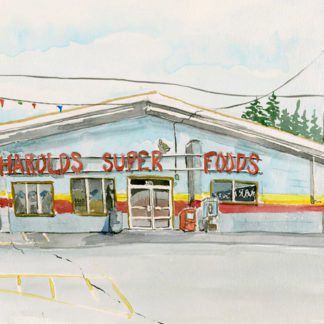