In June, 1989 I was involved in a car wreck while I was attending art school in Denver, Colorado. I was t-boned in the drivers side door at the intersection of 9th and Corona. An impact which collapsed the door 18″ into the cab approximately to the center of the steering wheel. Luckily for me, I was not wearing a seat belt and the impact knocked me into the passenger’s side of the truck, which in turn knocked my then girlfriend down onto the floor boards. The truck traveled to the corner of the intersection taking out the cement pillar and finally coming to rest against a retaining wall in front of a school. My girlfriend thought I was dead inside the truck. I watched the entire accident standing on the opposite corner of the intersection.

Eventually, I regained consciousness  and was surround by emergency personnel and dozens of spectators. One memory I have is as they had me strapped to the backboard and were pulling me out of the wreck, I noticed that one of my Birkenstock sandals had come off. As they were pulling the backboard out I stretched out my toes and snagged my sandal. (I was a struggling college student and those were expensive).

They took me to Denver General Hospital where I was first on the triage board. The nickname for this hospital is the Denver Knife and Gun Club because of the high number of traumas they deal with on a daily basis. There was a team of doctors waiting for me as they took me out of the ambulance. They were concerned because of what my heart was doing, they were afraid I was dying. During my out-of-body experience I only saw the wreck, there was not hovering and no white light or tunnels and no dead relatives beckoning me to follow. After many tests, x-rays and labs they found nothing wrong with me and four hours later, I walked home.

This is a piece from an upcoming retrospective show, by visiting my website you are one of the first to see these pieces.

There are no reviews yet.

Be the first to review “Near Death” Cancel reply 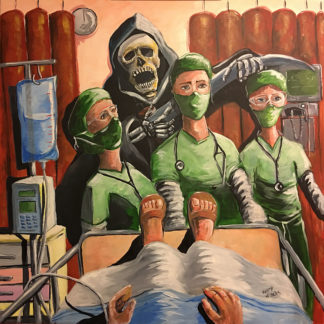 You're viewing: Near Death
Read more